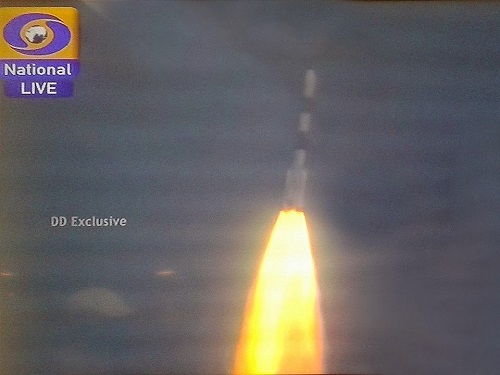 A friend of mine from India recently forwarded me the story of the successful launching of Mangalyaan. This initiative is part of the Mars Orbiter Mission of the Indian Space Research Organisation (ISRO). The ISRO is the Indian equivalent of European ESA and American NASA. First of al it is a great technological achievement and for that congratulations are in order. More details can be found on the site of the ISRO. It’s not as slick as the multimedia presentations at the NASA site, but certainly worth checking out further!

When I first learned about the Indian Space program I wondered why a country with a significant part of the population still living in poverty would invest in such ‘luxury’ as a space program. When discussing this with my Indian friend I came to realize this was a rather patronizing line of thinking. Obviously the Indian people are as curious as any of us and entitled to their scientific explorations. At the same time American and European budgets for a space program can be (and are!) questioned as other challenges need to be funded in these times of crisis.

Investing in this type of endeavours and funding basic scientific research is usually justified by the innovation and technological spin-off that it creates. At first glance that may seem to be far reached but when thinking about recent innovations with real impact in our daily lives we may be surprised to learn they all have been government funded. While companies like Apple, Samsung and TomTom get the credits for putting innovation in our pockets or on the dashboard of our cars, strictly speaking all they did was making government funded innovations portable: the invention and implementation of the internet, localization services (based on GPS) and also the touch screen are all results of publicly funded programs.

Optimists among us think that there are technological solutions for the major challenges we face in the area of energy, environment and (the feeding of) an ever increasing world population. That may be so, but is our faith in ‘the market’ to realize these solution also justified? Which companies will be able to convince their shareholders to invest the huge funds needed to invest trend-shifting innovation (and not just minor improvements or recombination of existing technologies)?

In a recent TED presentation Mariana Mazzucato investigates this further from an economic point of view and suggests the impact this should have. Please find the full TED-talk embedded below:

The “Baby on board!” sign illustrates that not all information is...
Scroll to top