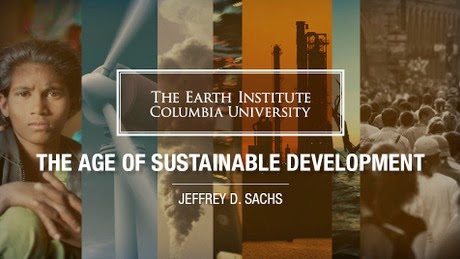 Last weekend I completed a course about Sustainable Development on Coursera. The past fourteen weeks professor Jeffrey D. Sachs from the Earth Institute and Columbia University shared his insights in a series of video lectures and suggested reading material. As a special advisor to UN Secretary-General Ban Ki-moon (and to his predecessor Kofi Annan) professor Sachs can talk in-depth about this topic. His message is clear and it is not a happy one: mankind is facing one of its biggest challenges and success at the end of the road is not a given.

Sachs sees four dimensions of sustainable development. There are the traditional three – economic development, social inclusion and environmental sustainability. But those three require in all cases the underpinning of a fourth dimension: good governance. In Sachs’ definition governance is about the rules of behavior, especially in organizations. And it is certainly not restricted to politics and government but encompasses both the private and public sector and especially the large corporations in the private sector. In other words: the companies we work for as management consultants. Which may indicate we have a role to play?

Only little room for optimism

After 14 weeks of discussing serious issues, professor Sachs closes off with an important question: “is sustainable development feasible?” and although he seems optimistic he leaves room for doubt. He refers to three recent books on the topic

and why these important thinkers are pessimistic about the future.

His story is about climate change, loss of bio-diversity, cities in danger, food supplies under threat, massive dislocations, widening inequalities of income, high youth unemployment and broken politics. At the same time short-term priorities distract a confused world. Obviously all of this is a very deep and real concern.

Moving towards a sustainable future will need a major mind shift among the population as a whole. Such a shift is feasible and the past has proved that. The abolishment of slavery, the struggle against European colonial rule, and also the human and civil rights movement are examples of great breakthroughs brought about by ideas and morality. In all of these cases a small group or even an individual was instrumental in inspiring to a change. I think it is a call for action to all of us. As professor Sachs concludes his final lecture: “Now it is our turn to see if we can move the world towards sustainable development”.

Tomorrow’s Lawyers: An Introduction to Your Future
Scroll to top