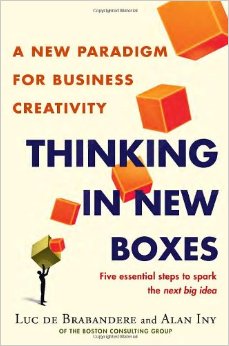 Recently I concluded an on-line course ‘On Strategy : What Managers Can Learn from Great Philosophers‘. The course was given by Luc de Brabandere, a professor at Ecole Central Paris and a fellow at the Boston Consultancy Group. During the course De Brabandere focused on change by distinguishing between changes in reality and changes in the mind. He explained about how the two are related and also how the dynamics of the two types of change are completely different. These ideas have been further developed in his book ‘The Forgotten Half of Change’. Quoting from the cover of this book: “Managers are trained to change reality. Leaders teach themselves to change perception. That is the essential and often forgotten half of change.”

Essentially De Brabandere shows us that it is impossible to understand and think about the world in all its rich detail. We can only translate what we see into mental models and every model by consequence is a simplification of reality. These simplifications are neither right or wrong but can be more or less useful in the way we think about reality. Making models happens in every field from science, business and the arts although the impact is different for each field.
A shift in perception is typically a step-change while a change in reality is more gradual in nature and this difference in itself is a challenge in any change process. In the area of business changing perception is called creativity, requires thinking and focusses on the individual; a change in reality is called innovation, requires actions and has a focus on the team. With simple mind games De Brabandere illustrates how the brain works and with examples from his consulting practice he shows how this impacts the way to address real-life business issues.
Another part of the course suggests to rephrase the often used ‘thinking outside the box’. If we define the proverbial box as a mental model, the original phrase itself becomes meaningless since we cannot perceive the world around us without any models. When our existing models fail us i.e. become less useful in our perception of reality we shouldn’t just discard them but rather replace them by more useful models. Consistent with that line of thinking De Brabandere spoke of ‘thinking in new boxes’ which is also the title of one of his books. In this book he describes a clear approach on how to develop a new set of models where appropriate.

In short, this course provided some new views on existing concepts and original insights in the world of philosophy and business. Luc de Brabandere is an entertaining teacher who can easily bridge the gap between both disciplines. The assignments, assessed by other Coursera participants were great fun. Apart from the fact that the concepts and ideas are very useful in daily business I highly recommend both the course and the books for anyone who wants to be intellectually entertained.

Regular Engagement Maintenance, a continuous effort in the relationship
Scroll to top